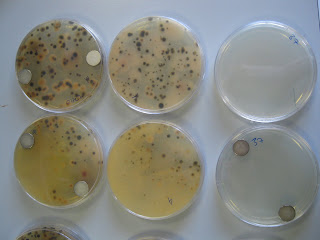 At the end of October, I went out to a secluded area of campus and sampled the micro-organisms in the air on settle plates (agar plates) for 5min. I used two types of plates, just plain LB agar and this with some magnets in, as I was interested to see if the magnets would have any affect on the growing bugs. (Later I may use the magnets to hold down the plates.) I used 4 plates per experiment but exposed them all at the same time, then incubated them at 4, 24 or 37°C. After 24h nothing had happened but after 48h small fluffy white colonies were found on the 24°C plate, then after 2weeks colonies were found on both the 4 and 24°C plates but not on the 37°C plates. At the time of sampling I also used the homemade impinger and will use the DNA in this for detection in the RPA reaction. I can now use this reaction to amplify sequences from DNA derived from archaea and yeasts too.
Posted by laughing snail at 4:40 PM