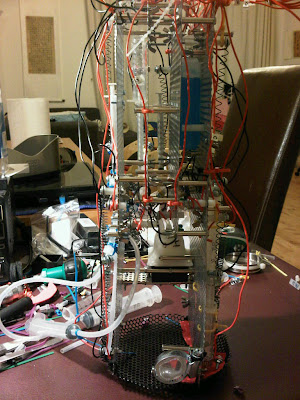 The last few months have flown by and we haven't had a moment to update on our progress on the blog. Ol has been flat out, pulling all nighters to finish the device, which you can see in the picture. There have been nightmares about reagent compatibility and he has manged, with almost unbelievable cunning, to fit four syringes in to the device to pipette in the required quantities of liquids in the right order. Paul and Ol have been doing all kinds of things, remotely from Canada in Paul's case, to ensure everything will work.
We have also run a competition with NESTA and NASA for 2 students to come with us to Nevada to fly the device - welcome on board to Joe and Rainbow. We had 120 applicants and it was really hard to chose even the last 6 finalists, nevermind the 2 winners! Rachel down at NESTA has been in an organising frenzy, sorting out logistics - accommodation, flights, food (you would never normally have to put so much effort in to camping, we're just going to not have a lot of water so many things will be tinned) and much more.
With only a few days remaining before Ol heads to NASA AMES we are thinking very hard about how to get our reagents to California with out breaking any laws, but also crucially keeping them all cool. Then Rachel, Paul, Joe and Rainbow will head out, getting a brief trip to NASA too, and then I'll go out last (hampered by a conference the week before!). 12 days in the Nevada desert - to fly the device as many times as is possible - on balloons and rockets! The people we're teaming up with are the Rocket Mavericks. We're going to the Black Rock desert - home of the burning man festival. There's no phone coverage and its very remote (austere as Ol says), so we're taking GPS and satalite phones and all kinds of wizardry - hopefully there'll be some good star gazing too.
We've also been in discussion with Kira O'Reilly and Anna Dumitriu for possible art interventions and collection of materials whilst on location in the desert. Currently we're thinking of making extensive diaries and trying to communicate with bacteria.
Posted by laughing snail at 10:12 AM 1 comment: