In researching how we’re going to detect microbes in the stratosphere I have been looking into what they might have to deal with – the cold (psychrophiles), low pressure (hypobariophiles) and radiation (radiophiles). There’s quite a bit of research out there reporting on psychrophiles – many organisms are surviving in the ice in the Arctic and the Antarctic, from bacteria or fungi. A whole conference has been held on them! There’re also reports on radiophiles, such as Deinococcus radiodurans, which is being exploited by NASA. But of hypobariophiles there is little (actually none that I can find) information of their existence. We should also think that these organisms will be xerophiles, meaning they can tolerate and grow in low water conditions, these can also be halophiles eg the fungus Trichosporonoides nigrescen, or endoliths, that live inside rocks, which would help with radiation protection too. The latter tend to be autotrophs too, making essential chemicals by themselves. Some many requirements......can there be such an organism?
Posted by laughing snail at 4:03 PM No comments:

Just a quick update to say that the first run of the recombinase polymerase amplification (RPA) has been successful. This is a great technique, that is over shadowed by the popular PCR reaction, that amplifies DNA sequences, the massive advantage here is that no specialist cyclers are required and it may even work at below room temperature....lots of things to try! For more info try the Twist DX website. 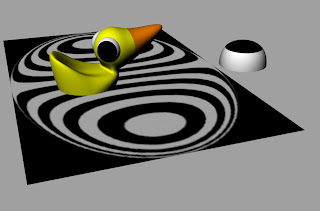 Not to be outdone.... I have successfully created a fully NURBS rubber duck floating on a funky textured ocean, being regarded by a giant floating eyeball.
Seriously though... this is my first Rhino structure - a powerful 3D design and imaging suite.
http://www.rhino3d.com/
I have now completed preliminary training and can proceed to designing the High Altitude Bioprospector as a 3D model - which we can then actually produce as finished parts using a 3D Printer.
In many ways this might actually be simpler than that duck - all straight edges! It took bloody ages to get those eyes right and even then it has a rather menacing myopia to it...
Posted by Astrobiologist at 10:49 PM 1 comment: 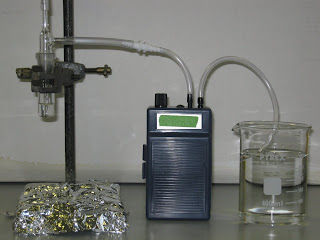 I had a mini glass impinger made by the glass blower at the university and then bought myself a small battery driven fish tank pump. With a few modifications to the pump I now have a system for pulling air through the impinger, perhaps a little wildly, but its a start.